Bonus Items
Posted by Jessica Peter at 1:15 PM No comments: Links to this post

30 Before 30 Accomplishment: Shoot a Gun

Shoot a gun was on my 30 Before 30 list, which may seem like an odd one, because I'm not really a gun person. BUT, because of my writing (and heck, because I watch a lot of cop shows), I thought it would be a smart thing to research by actually trying.

In February I was in Key Largo, and since Florida has very... um... "relaxed" gun control laws, I figured it would be the ideal place to give it a shot (ha!). So I headed out to a local range and tried out a 9mm. Against a zombie Nazi, of course. Didn't do too badly, either! Killed that thing even more dead. 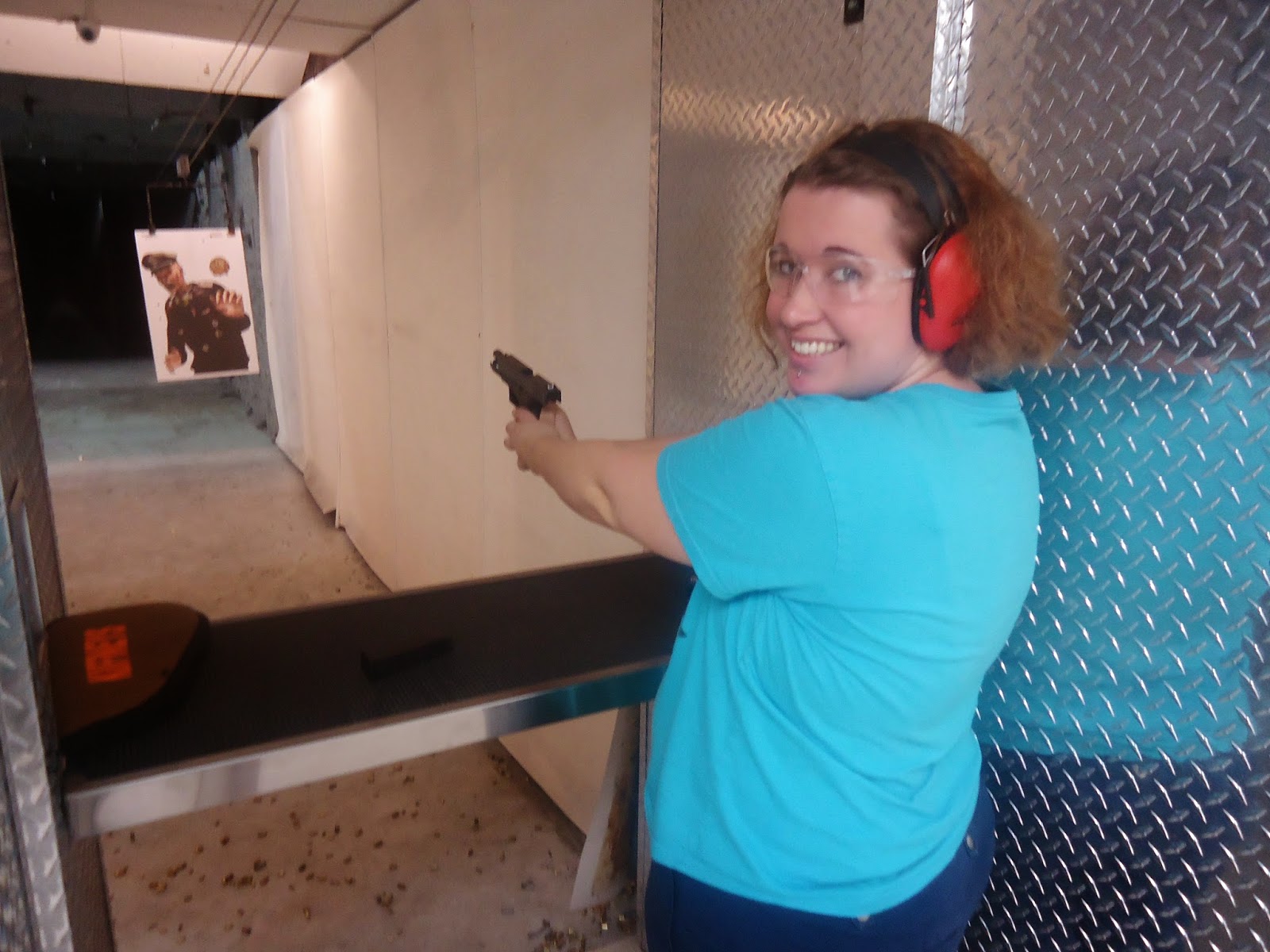 Posted by Jessica Peter at 1:13 PM No comments: Links to this post

Without any further preamble, the big breakdown of books I read in 2013:

Phew! If you want an in-depth look at my book choosing brain, you can check out the full list on my GoodReads account that I'm really getting into: https://www.goodreads.com/review/list/2709023-jessica?shelf=read-in-2013

Historical romance's landslide win is partially due to the fact that I read a crap-ton of books during my time in Africa, including pretty much all of the books on my e-reader. Which are mostly historical romances.

But some books shone beyond the others. Here are my new-to-me delights in some of my biggest genres for 2013:

The Madness of Lord Ian Mackenzie (Highland Pleasures #1) by Jennifer Ashley - Unlike many historical romance examples of "madness", this hero really does have a reason for the title - he's pretty obviously on the autism spectrum, and shows it. Combined with a heroine who's grown up in a rough household, it makes for a quite unique combination and a good read.

*Honourable Mention* One Good Earl Deserves a Lover (Rules of Scoundrels #2) by Sarah MacLean - Ms. MacLean was my first foray into historical romance, so holds a spot in my heart. This series is about the not-at-all-proper owners of The Fallen Angel gambling hell, and this book in particular had my interest with its science-loving, emotion-avoiding heroine. (But gosh, what's with the semi-silly titles of these books? I wouldn't say they are super light HRs!)

The Lords of the Underworld series by Gena Showalter - Oh, it's been out for years. But how can I avoid mentioning this new-to-me series about a bunch of immortal warriors housing the demons of Pandora's Box, living in a big house together? Like supernatural Big Brother or something. Not that I watch Big Brother, but still. I challenge you not to find a favourite. Mine are Gideon, the Keeper of Lies (who finds him match in book #6, The Darkest Lie), and Torin, Keeper of Disease (who has yet to have his book).

*Honourable Mention* MacRieve (Immortals After Dark #13) by Kresley Cole - This series charges forward and never gets stale. It's my favourite, and would dominate my lists forever if I let it. This one with one of the Scottish werewolves is no exception, and I read it in one sitting. Oops. Now I have to wait another year or so.

The Kitty Norville series by Carrie Vaughn - Another series that's been out forever, but I hadn't read it because, um, the first book wasn't available at my library to test out. Lame of me. But now at least I have the delight of finding these now! A relatable, not-very-motivated (to start) female werewolf ends up running a talk radio show about the supernatural. Interesting premise, good follow through.

Poison Princess (Arcana Chronicles #1) by Kresley Cole - Kresley Cole again, because she's fab. The world ends! It's set in Louisiana! There's a nice Cajun boy! It gets all post-apocalyptic! And it's all based on the Major Arcana of the Tarot. Excellent. I still have yet to read #2 which recently came out, but it will be SOON.

The Renaissance Soul: Life Design for People with Too Many Passions to Pick Just One by Margaret Lobenstine - I'm a self help book hater, but I picked this up because it sounded like me. I read it with delight, because it totally is me. I didn't realize that being so scattered with interests was such a "thing", and I hope this will help me in putting things together in my life. Perhaps!

Posted by Jessica Peter at 10:00 AM No comments: Links to this post

Something's up at my blog. Can you see it?

It's. . . oh gosh, I'm dismantling almost everything. But it's all because something super fab is on the horizon!

This blog, though. We've been together for a long time. I'm not ready to part ways yet. So it's sticking around, in the format of a personal challenge blog. My 30 Before 30 is the big goal list right now. Only a year and a month until my time runs out! And there are always other things that come up. My posts which still remain are challenges, books, and a few links or lists that seem to be especially enjoyed. 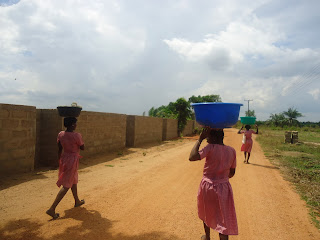 I killed two birds with one stone, but it was a really big stone (a boulder?).

11. Visit at least one country I've never been to
20. Volunteer in Africa 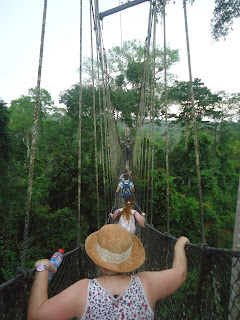 Both of these were accomplished with a 3-month internship in Ghana, part of Western Africa. I saw things in the country ranging from mud and thatch villages to multi-coloured ultra-modern high-rises. From rainforests to crashing ocean waves to leisurely rivers to dusty plains. Things historical, natural, cultural, and almost always colourful, and always accompanied by the really welcoming Ghanaian people. And I talked a whole lot about the experience here: http://traveljess.wordpress.com/

Posted by Jessica Peter at 4:56 PM No comments: Links to this post

Travel Jess Rises from the Ashes

I'm spending October-December 2013 in the rural Volta region of Ghana doing a placement for my Master's in Social Work. Because of this, posts here will be few and far between (if at all).

However, I am keeping up a travel blog! Come visit me at my revitalized Travel Jess blog, at http://traveljess.wordpress.com

Posted by Jessica Peter at 4:50 PM No comments: Links to this post

I can't believe it's already 2013, but that means it's time for my annual book round-up!

Not including graphic novels (3) or novellas (2), here are my total number of books read, by genre:

GRAND TOTAL = 99 books. This was a real year of historical romance, apparently. Over half the books in that category! And compared to last year's number (143), it's a clear drop. Not so surprising though, since I started my Master's program in September. With full-time school in 2013, I wonder if I'll see an even greater drop. Hm. . . .

A few RECOMMENDATIONS and "UN-PUT-DOWNABLES" from my 2012 Reads:
(in no particular order)

- The Lords of Deliverance Series by Larissa Ione - Four books so far in this paranormal romance series about the Four Horsemen of the Apocalypse. Lots of damage that needs to be healed in heroes and heroines, lots of tension of all sorts, and such a neat supernatural world. Also cameos from characters in her other series!

- The Urban Food Revolution: Changing the Way We Feed Cities by Peter Ladner - I read it for a paper on bringing the urban to the rural, but it made me entirely excited. This is what we should be doing to become empowered, and take charge of our own food! Things like: community gardens, farmers markets, fresh food initiatives at schools, farm shares. . .

- Cloudy with a Chance of Marriage by Kieran Kramer - This is #2 in her "Impossible Bachelors" series of historical romances, though I totally adored this one. It's about a woman trying to run a bookstore and at the same time develop her neighbourhood, when a pesky naval captain just returned from years of service decides to open up his own home to "relaxation". Light-hearted, yes, but the characters were so delightful!

- Damned Nations: Greed, Guns, Armies, & Aid by Samantha Nutt - What a "wow" book. Written by one of the founders of War Child, it's about her own experiences in developing countries (mostly African), as well as an overview of how aid, and more, can damage. Definitely a personal opinion sort of book, but I really respected the cynical-but-hopeful sort of attitude she gives. Recommended to anyone considering doing international volunteering/aid work.

- The Wallflowers series by Lisa Kleypas - A Regency romance series that is likely familiar to many Regency readers (but hey, it was the first time I've read them!). So pleasing with the four very different wallflowers who decide to take action and get something better. It doesn't always turn out the way they want, but the tension and romances are great in these.

- Quiet: The Power of Introverts in a World That Can't Stop Talking by Susan Cain - Such an interesting non-fic, and so necessary. There are a lot of things I "prefer" that I thought were a bit outside of the norm - turns out that no, I'm just an introvert, like PLENTY of other people. Good smatterings of science and personal stories combined make this a really enjoyable read as well.

- The Pink Carnation series by Lauren Willig - This is an interesting mashup of Regency-era spies (not usually my thing) with romance and a modern-day chick-litty heroine doing research on them (REALLY not usually) my thing). And it ends up really working, even for me! I like the modern heroine because of her drive to research (and can sympathize with her grad student life), and the historical romance/spy pieces are well-researched, well-written, and with often quirky, different sorts of characters.

I'm a heavy-duty tea drinker, and ever since my sister started working in the head office of Steeped Tea, I've dreamt of having a tea party of my own. Steeped is a home party business here in Canada that's all about loose-leaf tea, tea products, and other goodies. When I added "Host a Steeped Tea Party" to my 30 Before 30 list, I was thinking of doing just that. But then, I decided to take it a bit further. . .

And I'm becoming a Steeped Tea consultant myself! I had my "starter party" a couple weeks ago with the help of a more established consultant, and soon enough I'll be helping hosts with their own parties. I'm excited to share my love of tea with the world. 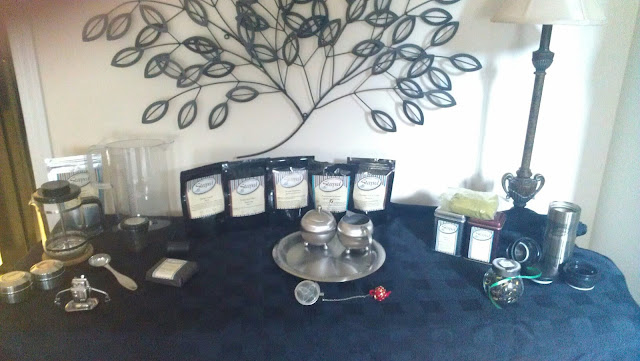 Some of the sample items shown at the party. 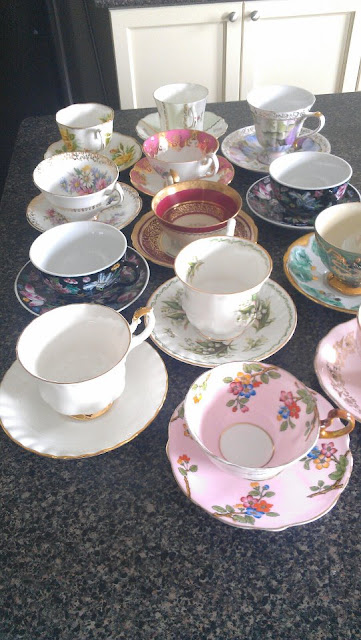 Posted by Jessica Peter at 1:46 PM No comments: Links to this post

Jessica Peter
I write, read, craft, travel, and I love stupid jokes, creepy things, interesting music, and raspberries. Currently editing a post-apocalyptic romance, and soon to be fixing up editing my YA urban fantasy. Big fan of my gritty, arty hometown, Hamilton Ontario.